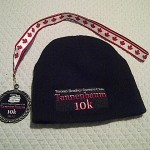 A couple of weeks ago I ran the Tannebaum 10k in the Toronto Beaches area. I had run the Tannenbaum 10k in 2010 but the course was very different then. I signed up for this race on a whim because I knew some other people from my local Running Room who were going to be doing it too.

The race is essentially the home race for the Toronto Beaches Runners Club. I think of them as a pretty intimidating and impressive group. The race has a feel of a community run they organized for themselves, but welcoming others into the community for the race! It was also nice to see some familiar faces helping out at the race including Dave Emilio and Duff McLaren.

I wasn’t properly trained for this race. I think I was finally recovered from my Chicago and Toronto double-dip, but didn’t have the motivation to train in late November. I wasn’t expecting a great time, but I expected I could beat my 1:03:53 from two years ago. For whatever reason, running in “traditional” shoes like my Saucony Hurricane 13’s was quite uncomfortable in November. I had been using my minimalist Saucony Kinvara’s successfully in training and decided to use them during this race, even thought I swore over a year ago I’d never race in them again…

Race day was practically a washout. I woke up that Sunday morning to pouring rain. We got soaked when we gathered for the carpool to the race. Fortunately, there was plenty of parking when we arrived and there was a covered shelter to wait in before the race. There were also indoor bathrooms near the start that were handy (and warm!).

My local Running Room made a pretty good showing: 11 runners and 1 spectator. It was also nice to meet Alice Toyonaga and Heather H. who I had previously only met through social media. Alice has an inspiring race report here.

The forecast said it would be over 5 degrees Celsius so it was warm enough that I could race in just one layer. However, the rain scared me into wearing my typical Running Room jacket. That would prove to be a costly mistake.

I seeded myself well-back at the start of the race. One of the 10k clinic instructors from my local Running Room planned to pace the race to finish in 1 hour. I imagine that if I started well-behind and finished with her or ahead of her, my chip time would be under 60 minutes. It turns out I actually started 29 seconds behind her.

I found the first 5k rather uncomfortable. The rain had eased off and my jacket had become a big bag making me way too warm. I also spent a lot of time dodging puddles, rather unsuccessfully might I add! made it to the half-way point at 29:58.

The course wasn’t too crowded which was nice. A lot of the course overlaps with the courses for A Midsummer Night’s Run and the Scotiabank Toronto Waterfront Marathon, so it felt quite familiar. It even goes out on the Leslie Spit (towards Tommy Thompson Park) which can be really nice. In nicer weather it would have been a beautiful view. But the smell of Ashbridges Bay treatment plant wasn’t so pleasant.

At the half-way point, I was surprised to find a little water station. The race website specifically said there wouldn’t be water on the course, so it was a nice surprise. At that station, I took off my jacket and tied it around my waist. Being able to dissipate heat better made it much more comfortable to run.

You could see the finish from a mile away which was nice. With about 1km left I finally caught the instructor who was pacing for 1 hour. There was someone with the instructor that left her to speed to the finish. That felt like a genuine challenge to me so I sprinted the last bit really, really fast. My Garmin shows that I ran the last kilometer in about 4 minutes! I finished under an hour gun time, and in 58:40 chip. And a huge split negative!

My heart rate data from Garmin Connect. Mugh higher in the first half, probably because I was overdressed.

Analyzing my Garmin data after the race, I noticed that my heart rate was much lower in the second half even though I was running much faster. I think it’s because I was overheating in the first half because of my jacket.

After the race we posed for a group photo. There was cinnamon bread from Cobb’s bakery in the shelter which was really nice. Duff McLaren was giving out draw prizes in the corner but we could barely hear him. I might have won a hat and didn’t know it. Dave Emilio took over the speaking for the awards.

One big plus from the race this year was the swag. Most races give out shirts, but this one gave away a toque! It was very handy following the race for keeping warm.

The race organizers can’t control the weather, but the other factors of the race all went well: Easy parking, available shelter and bathrooms, good course marking, volunteers, route and swag. I was glad to run it and may do it again next year!

« Nutrition Rant | You Win This Round Flu… »